skip to main | skip to sidebar

The territory of Delianuova extends like a terrace, with a surface area of 21, 04 Sq. km, at the center of Duverso River. It dominates the plane di Gioia Tauro protected by the massive shoulders of the Aspromonte mountains. Two antique communities, Pedavoli and Paracorio, created in 1878 an administration, with one city, and in homage to the origins of Paracorio, named the new municipality Delianuova. The origins of the two communities go back to the time

of the Arabic invasion, which took place between the eighth and tenth centuries. Refugees of Tauriana, a town on the Tyrrhenian coast between Palmi and Gioia Tauro, founded Pedavoli. Refugees from Delia, in the valleys of Amendolea, of Greek origin, founded Paracorio. Still today Delianuova and Bova are twin cities, whose ties are strengthened thanks to the ancient path running between the two seas, passing through the planes of Carmelia, to the Amendolea River, which joins the two towns. Residents of Delianuova often participate in religious festivities and fairs held in Bova and vice versa, maintaining ties going back a thousand years.
The first document on the invasions goes back to 1050-1064, when Dapidalbon, (village stable), became known as Pedavoli. Also the name Paracorio (settlement in the vicinity of the village) has clear Byzantine origins. For nearly two hundred years they remained rural villages of the country of Ruffo di Sinopoli, except for a short period, where they were part of S. Cristina, under the dominion of Spinelli until 1806. In 1783, an earthquake destroyed Pedavoli, which was later rebuilt in the same location. However, Paracorio, which was destroyed to the ground, was rebuilt in a new location, where it stands today. Even in Delianuova, the economy is based on the cultivation of the olive trees, which dominate the landscape up to an altitude of 650 meters. The picking of olives from November to May, is now done with the use of nets, which are placed under the plants, while in past, the picking was done exclusively by hand. Furthermore, the cultivation of a variety of vegetables brought good profit. Among them a variety of white bean, 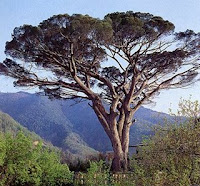 particular to the area known as “pappaluni” it’s described by P. Fiore in his 1600 book “Della Calabria Illustrata.” Only a few farmers continue to cultivate grain, corn and rye (called “jermanu”) which makes dark and very tasty bread. In this region, the breeding of the silkworm flourished and with it, the cultivation of white mulberry, moor mulberry, and art of weaving. Mentioned in the work of Barrio, in the second half of XVI Century, was the high quality of cloth produced in Pedavoli. Behind the Soffré mansion was an ancient factory active until the second half of the 1800's. A movie theatre was later constructed, in this site, which later became a community center. Along the entire historical centre we find architectural features carved in green stone, also used to make beautiful artistic doors for the mansions of Delianuova such as: Palace Soffré, Palace Princi, Palace Rossi, Palace Bellantonio, Palace Licastro, Palace Caminiti, Palace Malara, Palace Esposito. As well as the former Town Hall Pedavoli and the doors of the two parish churches. Nearly all are located on the main street, Umberto I°A. In the mountains above, in an impervious location, are the ruins of the ancient Basiliano Convent of
S. Marine, indicating the presence of a series of small convents from the first millennium, on the slopes of the Aspromonte. The earthquake of 1783 destroyed the ancient church of S. Giovanni in Pedavoli, located on the planes of the cemetery, where some ruins remain. Instead the church S.S. Assunta at the center of Paracorio, was rebuilt in the with New Renaissance style, with a colored façade, interior bell towers, and a nave with side chapel. The last restoration took place after the earthquake of 1908. Inside are statues of the Immaculate Conception from XVII Century and a wooden statue of S. Giuseppe. Above the alter there is a large painting of Maria S.

S. Assunta from XVIII Century. The festivity of Maria S.S. Assunta is on August 15; however the festivities begin July 30.
The church of S. Nicola, of the ancient Pedavoli, which was erected in 1590, was destroyed by several earthquakes. It was restored in 1940 and re-opened to the worshipers in 1999. It contains a statute of the Madonna with a child from XVI century, and a Candleholder from XIV Century, a wooden statue of S. Francisco along with numerous wooden altars. Among the more representative buildings Palace Soffré stands out for its exceptional architectural quality and the local green stone on its doors. Here, the composer Francesco Cilea, guest of the Soffré family, composed the famous opera Arlesiana. The natural surrounding constitutes a unique

frame to an already remarkable cultural estate; centennial trees like pines and oaks survive here. A few kilometers from the inhabited center on the Planes of Carmelia, exists a rest area. Continuing on the provincial road towards Cerzaballo, to approximately 1300 meters, we come across stretches of enormous boulders (“i gigantic”-giants) which are tied to a local legend.

Posted by Franco Papalia (Mbuiato) at 7:24 AM No comments:

The creation of archives, photos and history. Amusing stories, anecdotes and the negative experiences of our immigration, stories which our children can learn from.

Franco Papalia (Mbuiato)
Francesco Papalia Franco Papalia (Mbuiato) I was born in Rome in 1958, my parents (Fortunato Papalia, Nato u mbuiato, Maria Francavilla, Mariuzza a mbuta) moved to Delianuova when I was six months old. I have 4 sisters, Mimma, Rosa, Grazia and Antonella. I studied Medicine and Surgery at the University of Pavia and graduated in 1985, specialized in Neurology and Radiology. I work as a NeuroRadiologist in Turin (Torino) but reside in the Province of Cuneo, near Alba.